Not a lot of news from STO lately…. or maybe it’s me because I haven’t been paying too much attention. So today I’ll take a census of my toons on STO.

I’ve always been something of an altoholic when it comes to gaming. I dunno, something about the character creation process really appeals to me, so I usually end up with more than one character/toon on any given game. Fortunately for me, Star Trek Online not only supports multiple toons, but in many ways encourages it (for instance, dilithium farming pretty much requires multiple toons).

END_OF_DOCUMENT_TOKEN_TO_BE_REPLACED

I haven’t posted in a while not only because of the holiday season, but I ran into some health issues that affected my vision. Suffice to say I was in the Emergency Room for it and I’m still going through a bunch of tests as well as follow-ups with specialists. Keeping my fingers crossed here!

END_OF_DOCUMENT_TOKEN_TO_BE_REPLACED

Cryptic is rolling up another new ship for the Infinity Box, and this one is…. yeah, “Ikea DIY Space Toilet” is what immediately comes to my mind when I saw the picture. But to be fair, let’s have a look at the announcement and stats before I roast it.

END_OF_DOCUMENT_TOKEN_TO_BE_REPLACED

If I’m not mistaken, the Nova and Sabre are the last canon (movie or TV) Starfleet ships that haven’t received the T6 treatment yet, and have been much requested by many for quite a while. And they’re finally here!

END_OF_DOCUMENT_TOKEN_TO_BE_REPLACED

The news today is…

Here is a link to the report. I’m also copying and pasting most of it below, because it’s so badass! Captain Kirk, in space, for real. And you HAVE to admit, Shatner looks great for a 90-year-old guy. In fact, he doesn’t look like he’s much older than 65.

I only wish when he was up there, Shatner actually spoke those words in the title.

END_OF_DOCUMENT_TOKEN_TO_BE_REPLACED

With a name and title like that, you might never guess this is on Star Trek Online. Sure sounds like Cthulhu Online or something (is that a thing?).

END_OF_DOCUMENT_TOKEN_TO_BE_REPLACED

The Steamrunner class is one of the few remaining canon Trek ships that hasn’t had a T6 update yet, so this release is long overdue.

Not only is the Steamrunner a canon ship on the shows and movies, but for those of us who played Star Trek Armada back in the day, it was known as the “long-ranged artillery ship”. It’s nice to see Cryptic honors the Steamrunner’s roots in Armada, and gives it a bunch of torpedo-specific goodies.

END_OF_DOCUMENT_TOKEN_TO_BE_REPLACED

I stumbled on to this medley produced by VioDance, playing the main themes of all the Star Trek series from the original to today, and I feel that this should NOT be missed. Click the video link below.

The nostalgia is STRONG with this one; parts of it gave me goosebumps (even when I don’t really consider myself a Trekkie… maybe this tells me I’m lying). Also, I may not have any connections to the Discovery and Picard series, the music themes are still good. It’s stuff like this that makes me go back and hang out on STO every now and then.

Check out these guys’ website for other goodies. www.viodance.com

As I said before, aside from Disco Season 1, I have not seen any of the new Star Trek shows so my connection to them is virtually non-existent. But in the last few days I have seen quite a few of the new Parliament class from Lower Decks flying around ESD, and out of curiosity for the new design I investigated a bit….

END_OF_DOCUMENT_TOKEN_TO_BE_REPLACED 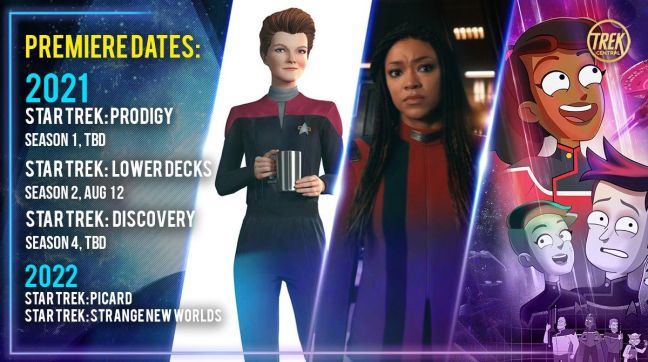 Star Trek TV shows had a long and bumpy history, going as far back as Kirk and crew in the 60’s. Arguably, the franchise saw its heydays between the debut of The Next Generation (1987) and the end of Enterprise (2005), after which there was a long vacuum.

Discovery came along in 2017 to revive Star Trek’s presence on the small screen, but it was controversial for turning many of Star Trek’s canon on its head — it was not universally loved (or accepted) by Trek fans…. and I’m being very generous here. Since then, Picard has also debuted, followed by the animated Lower Decks. And now, there is a host of new Trek shows piling on top of each other.